The Epiphany of the Lord 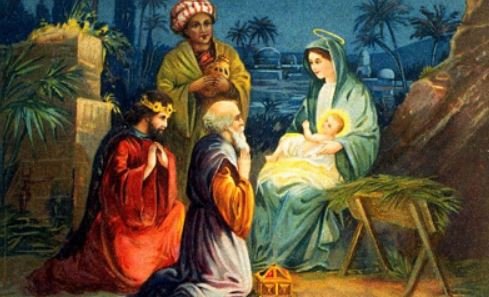 Thanks for Dale Zanetti, Director of Adult Faith Formation, for the entry this week.

This coming Sunday we will celebrate the Epiphany of the Lord. It is a Solemnity that our Church celebrates yearly. "The Lord and ruler is coming; kingship is his, and government and power." (Entrance antiphon for the Mass of Epiphany).
Epiphany means a revelation or manifestation. Have you ever heard someone say: “I have just had an epiphany” and then they reveal the revelation? That is an Epiphany. This is the story of the Three Kings or Astrologers who follow the star to the manger. Where they find a revelation to the Gentiles. God’s salvation is not just intended for the people of Israel but now is for all people.
This solemnity falls on the 12th day of Christmas and completes the Octave of Christmas. God reveals himself to us right up front – while the babe is still in the manger. Jesus did not come just for the House of Israel but for all humankind. In our first reading (Isaiah 60:1-6) there is a very important line: “One day all nations will become God’s children” and in our second reading (Ephesians 3:2-3a, 5-6) Paul tells us he has been called by Christ to speak the truth. That the gentiles are coheirs, co-partners of the same
promise given to the Jews. The Jews are God’s chosen people, and will always remain as such, his family. Now though this babe in the manger changes everything and the Gentiles are now a part of this family which forms the New Israel and shares in the inheritance.
In the Gospel (Matthew 2:1-12) Matthew tells us of the birth of Jesus and the events that happened and uses some Old Testament texts to lead us there. We need to keep in mind this is not about the birth of Jesus but about his birth after he was glorified. So, it is not necessarily a bit by bit true story about his birth but more about the message of his birth. That message is clear in this passage of Matthew – Jesus has come to save us all. The Magi arrive in Jerusalem and are seeking the newborn king of the Jews. They have followed the star and it has led them to Jerusalem. Herod hears of this and consults the religious experts of Judaism to find out where the Kings should look. There is no doubt, they should look not in Jerusalem, but in Bethlehem – the city of David (City of Bread).
The term used is Kings, Wise Men or Astrologers and Matthew mentions the star they followed showing that they were wise men who knew how to follow the stars. They also may have been wealthy, influential and highly educated. They certainly were wise in being able to detect that King Herod was “pulling the wool over their eyes” by asking them to report back to him. One of the most important things about them is that they were not Jews. They are considered to be the very first gentiles to receive the call to salvation in Christ-Kings bowing to The King. Lives that truly encounter Christ are changed. And these Kings were no different. They came, they saw, they adored and warned and encouraged by the dream returned home.
The gifts the Kings offered were most valuable and have symbolic meanings:

Did you see the “Epiphany” in this story? It is almost too good to be true, but true it is. God became flesh to save us all. What qualities do you think the Magi had that helped them to stay the course on the long journey following the star? Have you ever had an Epiphany? Can you compare your journey of faith with
that of the Wise Men?
Today the Magi gaze in deep wonder at what they see: heaven on earth, earth in heaven, man in God, God in man, one whom the whole universe cannot contain now enclosed in a tiny body.As they look, they believe and do not question, as their symbolic gifts bear witness: incense for God, gold for a king, myrrh for one who is to die.
St. Peter Chrysologus, Bishop and Doctor of the Church
Our FORMED Recommendation for the Week
Series (~10-20 mins per episode) - Me and My House
https://watch.formed.org/me-and-my-house
Me & My House is a practical game plan for Catholic parents who are struggling with all the things that parents struggle with. We challenge you to do little things. To make little changes that will make a huge impact on your family.
In this Catholic Parenting Program, you will discover the foundations that can strengthen your motherhood and fatherhood. You will learn the habits that can make parenting easier, and the habits that you absolutely want to avoid. In fact, we will get so practical that we'll discuss discipline and how to set boundaries, so that by the end of the program you will have a very clear sense of how you want to build your unique family culture with the children God has given you.
We have also included an entire section on the Faith, so that you can begin guiding your son or daughter towards God's plan for their lives in a way that is natural and effective. Our host, Patrick Sullivan holds degrees in Literature, Education, and Theology. His talks have been aired on Shalom World Television and EWTN, and he travels internationally to lead seminars and conferences on Catholic parenting. Patrick is married to the love of his life, Kyla, and is the proud father of 9 children, one of whom is praying for him from heaven.
The program run time is approximately 5 hours and 40 minutes
If you haven't done so already, go to https://visitationrcchurch.formed.org/, click on the REGISTER NOW button. Enter your e-mail address on the registration screen and you're good to go!
Do you find these weekly eCommunity mailings useful and think that family members or friends could benefit? Invite them either by having them text VisitationBrick to 84576 on their smartphone or by signing up on our parish website at http://visitationrcchurch.org/ - we'd love to have them join us!
Sent by Fr. Ed Blanchett on Friday, January 3 at 3:00PM